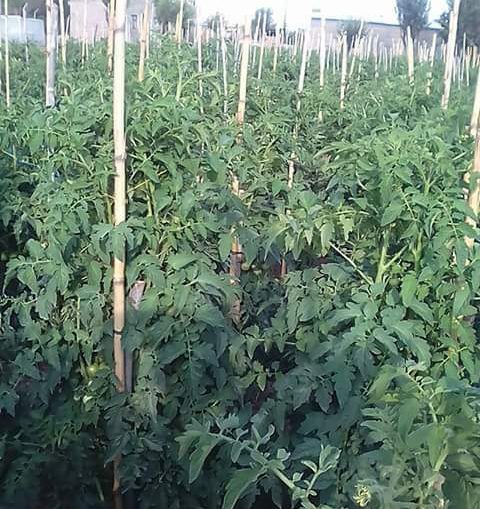 Climate change is considered one of the biggest crises facing humanity today, it has posted threats to food security due to negative effects on agriculture, but a legion of smallholder farmers in Lesotho are fighting to defy the odds and are cashing in on vegetable production.

One such farmer is Tšepo Massa, who says he is now only growing vegetables from a tiny 900 square-meter field within the Maseru City Council area—Ha Pita—forced by the harsh climate change effects.

This is evident in Lesotho as contained in the national climate change policy document of 2017.

The policy provides that the country has experienced in recent years, increasing frequency of natural disasters, extreme weather conditions worsened by drought, storms and floods.

It further reads that farming is in steady decline, while food insecurity, human, animal as well as crop diseases, loss of biodiversity, soil loss, land and environmental degradation; and depletion of the country’s natural resources bases are on the increase.

These effects, it has been established lead to low harvest in agricultural production due to crop failure and poor pastures for animal feeding in Lesotho.

According to the World Food Program (WFP) office in Lesotho over 30 percent of the Lesotho population—2.2 million—across all 10 districts will face “high levels of acute food insecurity until March 2020”.

The WFP also says Lesotho has 57 percent of its population living below the poverty line, meaning they have to live on less than USD 1.25 (M18.00). “About 508,125 people are food insecure,” reports the WFP.

Aware of the long-term impact of climate change, Basotho youth through the National Youth Policy 2017 advocated for inclusion of climate change and environmental studies in school syllabus by 2025.

This is intended to equip future generations with skills and expertise to overcome climate change impact on agriculture, especially on food production and to spur job creation, economic growth and sustain livelihoods.

In response to this call, Ministry of Energy and Meteorology-Lesotho Meteorological service in collaboration with Ministry of Education and Training through National Curriculum Development Centre developed climate change toolkit for teachers.

The main intention was to provide basic understanding of the subject matter so that teachers could meaningfully understand and teach climate change. This was piloted in 56 primary schools from class one to class four across the country.

In 2018, the climate change adaptation manual for teachers was developed by National Curriculum Development Centre and Ministry of Energy and Meteorology through Reducing Vulnerability from Climate Change project.

The manual was developed as a direct response to address climate change issues through education and therefore, instil sustainable practices that would save Lesotho from climate change hazards.

The manual is currently used by teachers in in three community councils of Mohales’ Hoek district, Lithipeng, Thaba-Mokhele and Khoelenya. The plan is to extend the programme to cover all ten districts in Lesotho.

According to Lesotho Meteorological Services analysis of 2017 on climate change policy 2017-2027, climate change impact could push 100 million people into poverty by year 2030.

Climate Action,   an international organisation that accelerates international sustainable development and advance green economy, urged in February 2018 that climate change challenges call for adaptation through use of a combination of new sustainable agricultural methods.

These, the organisation, said include use of mobile technology, crop scheduling, drip irrigation, construction of infrastructure (mostly greenhouses) more resilient to extreme weather.

Although the new innovative methods are gradually being adapted by farmers in Lesotho, many still consider them costly and continue with traditional methods amidst climate change ending in poor harvest.

Many Basotho farmers, as a result of slow pace in adapting to these new methods, were discouraged to continue farming in large scale to the extent that some sold their fields.

Some were frustrated and ended neglecting their fields and soil erosion took a toll on them while others sold their livestock due to inability to feed them as most depended on feeding them crops residues after harvesting.

Seeing these mounting challenges for farmers, one would think that it is over with farmers in hard hit impoverished places like Lesotho.

But a generation of new comer farmers in Lesotho are navigating these harsh climatic conditions to and say as long as there is still land to use, seed to sow and drops of water to gather for irrigation, crop production is still a possible practice from household level to commercial level.

For Massa, his dream is for more Basotho to join the vegetable production.

Massa, in a Facebook status update, said “My dream is that every Mosotho be able to produce variety of vegetables for themselves where they live”.

Massa, affectionately known as Black Boer Massa is a qualified Crop Scientist, from the National University of Lesotho, is gifted and passionate about vegetable production and work as a private crop consultant as well.

He is a seasoned young crop producer and continuously shares his knowledge with other farmers at various platforms.

Massa is keen mostly in exchanging knowledge on efficient crop production for household and commercial purposes.

Massa indicated that climate change is real and will continue to be there maybe even bringing more challenges in regard to agricultural practices.

However, Massa emphasised that Basotho, especially the youth, have to appreciate that agriculture is an applied science and technology, therefore, have to adopt new technologies and practices that are now used to maximise production.

He advocated for Basotho to depart from traditional agricultural practices and employ new technologies and practices such as conservative agriculture—good for soil conservation—like basin planting—known to Basotho as Temo ea Likotjana—mulching, application of organic and chemical fertilizers for improved soil fertility.

He also added that when all these is done another killer aspect is the use of plastic tunnels and greenhouse—known as protected agriculture—to protect crops against heat waves caused by global warming.

“Like any other industry, agricultural sector also faces trends and threats due to various factors like climate change, therefore I encouraged our people to attend workshops and approach qualified consultants like me, to acquire new skills and up to date information on things like crop diseases that will aid them to thrive against challenges affecting agricultural production.

“Our youth must start putting their main focus on engaging in commercial agriculture and be open minded to adopt global changes and technologies that are used to maximise production with the aim of being main suppliers in the market and target exporting to other countries, in so doing, they will be creating job opportunities as well as contributing to Lesotho’s economic growth,” said Massa.