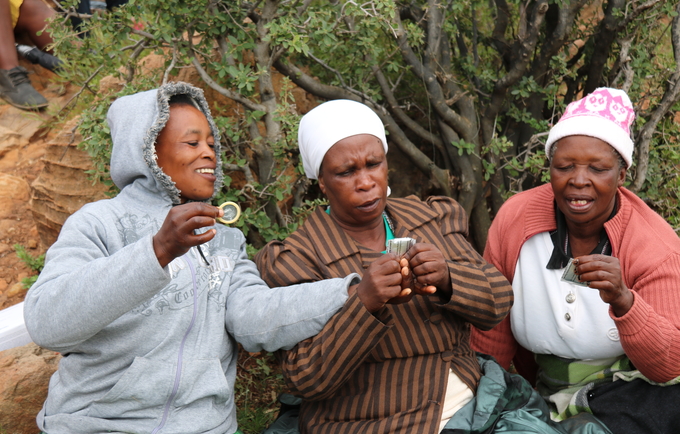 Cultural norms have dictated that women shy away from acts that expose their sexual desires.

Women in Lesotho are frowned at if found carrying condoms on them.

This exposes them to unplanned pregnancies, sexually transmitted diseases and further elevates their risk of contracting HIV.

The female condom, known as femidom, was developed in the late 20th century, but it remains inaccessible for women in Lesotho in comparison to the male condom.

It is said the female condom was primarily developed due to refusal of some men to use a condom owing to claims of loss of sensation while male condoms have been used for centuries.

For Thuso Sephula, a 23-year-old Mosotho man from Ha-Takalimane Mazenod the female condom is not very popular among his peers such that even when discussing issues of sexuality, contraceptives, and HIV, it (femidom) never comes up.

“Most of us carry condoms with us but even when we do not have them, we have never encountered our sexual partners insisting we use a female condom,” Sephula said.

He explained that he is aware that a femidom does exist but has never seen it, adding that he heard it was complicated to use hence it is not very popular among the youth.

Sephula’s claims on youth conversations never touching on use of femidoms are also reiterated by Mpotseng Mphuthing, Population Services International (PSI) nurse based in the Berea district who says most women reject femidoms offered to them for use with their partners at clinics.

Initially, Mphuthing says men rejected femidoms as they required their users to put them on eight hours prior to sexual intercourse.

However, she says with development in science and technology the femidoms brands changed to friendlier products that work just like male condoms.

“I do not understand why women are not warming up to femidoms because they were made especially for them so that they are able to protect themselves without relying on their male counterparts to use a condom as they are now to use,” Mphuthing said.

She says her organization, which distributes and promotes usage of condoms, has not received female stock condoms for over the past six months now.

The femidoms, supplied by the country’s only medicines supplier—National Drug Services Organization—Mphuthing says they have only been supplied with male condoms stock over the past six months.

She says the supply had stopped without valid reasons as to why femidoms are unavailable.

Mphuthing argues the unavailability of the femidoms derails campaigns to popularize the products among women and promoting and sensitising them about their sexuality and their reproductive health.

Lephoto’s reasoning was that their procurement quantities are informed by the need at health facilities.

He further said their high supply of the male condom is driven by healthcare facilities requests that favor male condom to the female condom.

Lephoto’s sentiments were corroborated by ‘Mafoto Khobotlo, the customer service manager at the medical supplier who says professionals on the ground know better why the demand for female condoms is low because they deal with end-users.

Khobotlo confirmed availability of femidoms stock in two of their warehouses in Mafeteng and Berea amounting to 75 000 condoms, while male condoms were amount to 13 400 in storage.

She verified the male condoms are in more demand than female condoms as they are always requisitions for them.

The medical supplier, Khobotlo says NDSO uses a pull system where health facilities request the supply of condoms, either female or male, implying health facilities without such condoms are not requesting them.

“We cannot use push systems as a supply chain because clients know better the demand they have and quantities needed therefore to avoid wastage, we use the pull system,” Khobotlo maintained.

On the contrary, Mphuthing pointed “there are inconsistencies in the promotion of female and male condoms”.

“Healthcare workers seem to have attitude towards femidoms because they do not promote them as much as male condoms even though there has been demonstrations on their usage”.

She explained however that the attitude could be due to the fact that they are often unavailable.

She advised that there is a great need for demand creation on female condoms usage to protect women from their male counterparts who are relatively reluctant to use condoms.

Mphuthing says if female condoms are readily available women can protect themselves easily.

This, she says, may encourage women to be more open to proactively use female condoms.

The United States National Library of Medicine notes that femidoms work as a birth control, protects against infections spread during sexual contact, including HIV.

It further says the femidoms are 95 percent effective when used correctly and allow women to protect themselves from pregnancy and STIs without relying on the male condom.

Lesotho’s Member of Parliament Tšepang Tšita-Mosena says femidoms are not given the same attention as male condoms so much that they have become a silent tool yet play a vital protective role.

Tšita-Mosena says femidoms are not as readily available in public spaces as male condoms, which is unfair to women.

“Femidoms have become a taboo, so much that most women even choose to carry the male condom. Admittedly, this is because there has not been much advocacy on them,” Tšita-Mosena says.

According to Tšita-Mosena inaccessibility of female condoms put girls and women at high risk of pregnancy, especially those who are not on any contraceptive.

She believes that women have the right to conceive by choice but that is often not the case when with male partners who may not have condoms with them or simply not want to use protection yet want to engage in sexual intercourse.

“It should not be the decision of a man alone for a woman to conceive, this gives too much power to men over women’s bodies, and women should regain their power”.

She reasoned that some of the girls are still young and their bodies are not yet ready to conceive and that some are not emotionally and financially stable to handle the consequences of unprotected sex.

Moreover, she lamented that no protection exposes girls to Sexually Transmitted Diseases (STDs) and further elevates the risk to HIV/AIDS infections.

Having realised the need for female condoms, Tšita-Mosena says it is her responsibility as an MP to advocate for activism on these condoms so that more women are aware of them and they are made available in public places for easy access.

“I have already started to talk about the issue in parliament. It is important to use every opportunity we have to talk about sexual and reproductive health and rights, especially the need for accessibility of femidoms,” Tšita responded.

Women’s sexuality in Lesotho is largely suppressed by cultural norms and many women find themselves at the risk of not only being denied a right to choice on whether to use a condom or even a female condom during sexual intercourse due to high incidences of gender-based violence meted on women by men.

Most men are at times reportedly—whether it be their spouses, girlfriends, casual encounters and or even in the case of ladies of the night—said to dodge using condoms and even resorting to both sexually and physically abusing women over the mention or call for them to put on a rubber.

In a statement released on Friday 22 November 2019 on the commemoration of 16 days of Activism Against Gender-based Violence, the Southern African Development Community noted the importance for member states to address the root causes of GBV.

The regional body’s Executive Secretary Stergomena Lawrence Tax said the root causes of GBV include imbalance in power and control dynamics between men and women that perpetuate gender inequality.

“We must ensure accessible and responsive justice and security institutions to fully implement laws that protect the rights of women and girls,” Tax stated.