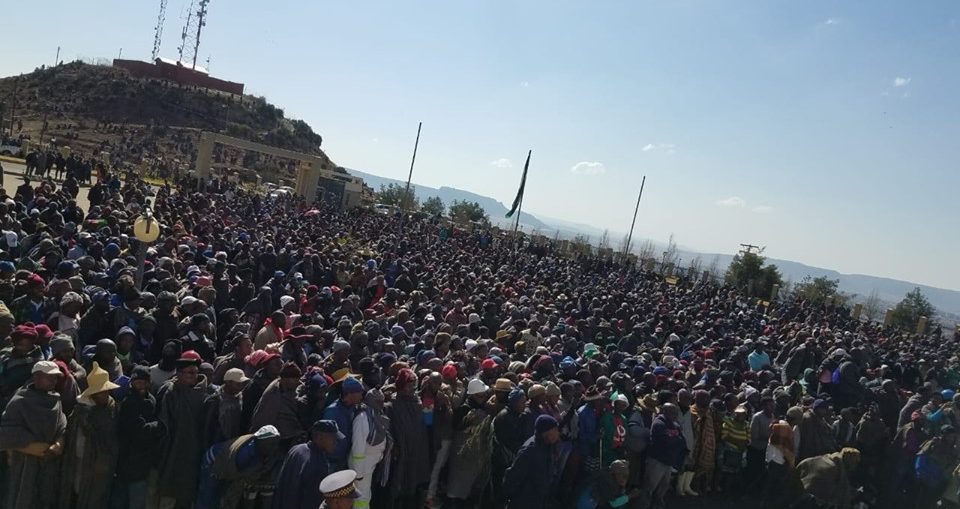 A three-month grace period temporarily lifting government’s ban of the independent export of Lesotho’s wool and mohair announced by Prime Minister Thomas Thabane was on Friday condemned by disgruntled farmers as a cover that still continues Chinese monopoly over the country’s precious products.

In their petition, the farmers argued Thabane’s grace-period was nothing but a smokescreen meant to bolster a botched partnership between them and Chinese partner Stone Shi.

Shi had presented himself as a highly-connected wool and mohair broker but has since failed to deliver the profits he promised to the farmers.

Thabane’s administration, through a special amendment of a subordinate law regulating the wool and mohair industry, forced the farmers to hand over their produce to be brokered and sold to China exclusively through the Lesotho Wool Centre in Thaba-Bosiu.

The Centre is operated by Maseru Dawning Trading owned by Shi.

The government had amended the law in August 2018 to ensure the sale of wool and mohair only took place within Lesotho, ending a long-running tradition of the products being auctioned by brokers at a free market in Port Elizabeth in South Africa.

In addition, the government only granted one licensee—Shi—exclusive rights to act as the broker and seller of Lesotho’s wool and mohair.

This new law, much supported by both ministers and Members of Parliament (MPs) from the ruling seven-party coalition, was challenged by opposition MPs and the LWMGA publicly and in the courts but the farmers lost the legal battle.

Now, one year since its introduction, many farmers have been left destitute after Shi’s promised better returns never materialised.

The farmers say they are being paid late and had been complaining about low returns and also that Shi failed to secure Chinese buyers as promised.

But Shi’s spokesperson, Manama Letsie insists nothing is wrong, adding they only had a few teething problems which shall soon end with all farmers paid for their produce.

In a botched partnership, the LNWMGA and Shi’s Maseru Dawning Trading (PTY) LTD entered into a joint-venture in 2016 to establish the Lesotho Wool Centre in Thaba-Bosiu.

The scope of the project was to build and operate the Centre which would include many functions ranging from wool-classing, wool-baling, transportation and finance.

On completion, the Centre was supposed to promote and ensure the development of the wool and mohair business in Lesotho.

But all this has not materialised to date, with Shi seeking the Centre to be used as a broker of the farmers’ produce, a development which resulted in court battles with the LNWMGA.

But upon losing the legal fights, Shi was handed a lifeline following the enactment of a favourable subordinate law—the Agricultural Marketing (Wool and Mohair Licensing) (Amendment) regulations, 2018.
This subordinate law effectively created a monopoly for Shi, sparking a public outcry.

It is this outcry that forced Prime Minister Thabane on June 26 to announce a grace period allowing farmers to sell their produce wherever they want.
In a statement, Thabane said after considering the public outcry and the unsatisfactory returns, the government had decided to suspend the regulation for three months.

“Government shall open for all those wishing to be wool and mohair brokers under certain legal conditions to apply. As such, government is waiting for applications to be submitted with immediate effect by candidates. The issuance of the licenses shall be done by public officers and experts.

“While waiting for the new wool and mohair brokers to start doing their work, government shall allow all Basotho who still have unsold wool and mohair in their possession to sell wherever they choose within a three-month grace period.

“Government shall ensure that all unpaid farmers who took their wool and mohair to Lesotho Wool Centre are paid with immediate effect.”
Thabane finished his statement by assuring the farmers that government would continue to support the production of better wool and mohair so that Basotho can benefit from the products.

The petition was received by National Assembly Clerk Fine Maema on behalf of the Speaker.

In their petition, the farmers dismissed Thabane’s decision as a bluff and said they wanted an outright abolishment of the new law that created the monopoly for Shi.

The petition was copied to Senate President ’Mamonaheng Mokitimi, leader of the House in the National Assembly who is also chairman of the parliamentary business committee, Deputy Prime Minister Monyane Moleleki, Mahobong constituency legislator Mothetjoa Metsing, who moved the motion on the issue, Chief Peete Lesaoana Peete- the Senator Chairman of Legislative Committee of the Upper House and the Official Leader of the Opposition Mathibeli Mokhothu.

Reads the petition: “We write to the Honourable House of Parliament to humbly request for removal of Legal Notice No 65 of 2018 as those regulations prevent us from selling our fibre at an open and internationally-recognised market with optimised returns.

The farmers also argue that Thabane’s grace-period only coincides with the season in which farmers would be able to shear and deliver mohair to brokers alone but further allows the same draconian laws that handed their wool to Shit to prevail when the product that the Chinese want—wool—is being sheared and ready for sale.

“It should, therefore, be noted that it is now clear to us that the three-month window-period announced by the Right Hon Prime Minister (Thomas Thabane) clearly shows that the intention is to clear the mohair from the woolsheds as the Chinese are not interested in mohair but wool.

“It is, therefore, clear to everyone that in three months, the wool would not be ready for the market. It should be noted that there is no current-year wool in the bales at the moment and only in September, sheep would be sheared and the three-month window-period would not be beneficial to us, therefore we are here demanding that the parliament of Lesotho remove Legal notice No 65 of 2018 completely as it is not beneficiary to Lesotho’s fibre industry,” the petition noted.

The farmers further say the new laws were proof that Lesotho’s leadership did not know or understand the fundamentals of the wool and mohair industry, hence its “wrong” decisions.

Meanwhile, since Metsing moved the motion for the new laws to be examined, which parliament unanimously voted for, pressure has been mounting on the government to repeal the regulations.

In a show of unity rarely seen in Lesotho, MPs from across the political divide, on 10 June voted for a motion establishing an ad-hoc Parliamentary Committee to look into the policy and the country’s wool-and-mohair industry as a whole.

The committee begins its work on 2 July and is expected to complete the investigation on 11 July.