A protracted judicial crisis in Lesotho has left Prime Minister Thomas Thabane in frantic efforts to restore stability, such that the premier even pondered appointing former Chief Justice Mahapela Lehohla to the presidency of the Court of Appeal.

This is revealed in a trove of letters between His Majesty King Letsie III, Dr Thabane, former Assistant Registrar of the Court of Appeal ’Matieho Mothobi and other senior judicial officers.

The MNN Centre for Investigative Journalism this week discovered the trove showing Thabane was so desperate that he considered Justice Lehohla for appointment to the country’s apex court.

This came after the premier’s efforts to appoint Dr Kananelo Mosito for the position were frustrated by a marathon legal challenge filed by the country’s four senior lawyers arguing Mosito was unfit for the post.

Lehohla was chief justice until August 2013 and was appointed chairperson of the Independent Electoral Commission in December the same year.

Before his retirement, he was locked in a bitter power battle with the then president of the Court of Appeal Michael Ramodibedi.

Their dispute brought the judiciary into disrepute and effectively impaired its performance and in the end they were asked by Thabane to resign to restore the integrity of the judiciary.

The letters reveal how the prime minister wanted to bring back the retired chief justice, only now as the Court of Appeal acting president after South Africa’s Justice Yvonne Mokgoro turned down the appointment.

“Your Majesty will recall that I advised Your Majesty to appoint Justice Yvonne Mokgoro of the Republic of South Africa to act as President of Court of Appeal. She has, however, later advised that unforeseen circumstances will not allow her to take up the assignment.

“Your majesty will further recall that Honourable Judge Mahapela Lehohla was considered to fill the vacancy in the interim,” Thabane wrote in his letter dated March 16, 2018.

He added: “Your Majesty will also note that Judge Lehohla, because of his current position as the Chairman of the Independence Electoral Commission, will not be an appropriate choice of appointment, and as such he will also not be in the position to take up the appointment.”

Thabane had first appointed Mosito for the presidency of the Court of Appeal ahead of the February 28, 2015 snap elections.

The elections were won by Thabane’s archrival and former prime minister Pakalitha Mosisili who soon launched a tribunal in 2016 to determine Mosito’s fitness to holding office following allegations he had evaded taxes. Mosito was forced to resign.

The tribunal had recommended his impeachment but before the tribunal could make its decision, Justice Mosito resigned from office rendering the tribunal to serve no practical purpose.

On 13 February this year, his re-appointment by Thabane—after his return to power in June 2017—was declared null and void by the Constitutional Court on the grounds that he “is not a fit and proper person” for the sumptuous job because he had been impeached by the tribunal.

Now Mosito is fighting to have the Court of Appeal reverse the Constitutional Court’s decision alongside his co-respondents that include the prime minister himself.

In the application before the Court of Appeal, Mosito argues the Constitutional Court erred and misdirected itself in findings for the four lawyers.

Among other things, Justice Mosito argues that the Constitutional Court was wrong to conclude that the tribunal had found him unfit to hold office.

He argues the tribunal’s findings were of no consequence as they were made after he had already resigned from his position as Court of Appeal president on 13 December 2016. The Court of Appeal is now set to hear Mosito’s case soon.

The letters reveal on March 5, Mothobi wrote an email to Mosito’s lawyers notifying them of the full bench of the appeal – Justices Hlajoane, Kriegler, Shongwe, Van der Westhuizen and Cachalia – composed to hear Mosito’s appeal.

“I have been requested by Justice Y. Mokgoro A.P. (Acting President) to ask if any of the parties have any objection to the above justices being included in the full bench that will hear the matter and if so, to indicate the reasons,” Mothobi wrote.

But just the following day, March 6, K.J. Nthontho Attorneys wrote a response email back to Mothobi, noting: “Our clients object that, as presently constituted, the panel has too strong a South African component”.

The attorneys added: “As you are aware, Justices Kriegler and Van der Westhuizen are some of the Judges that resigned in protest after the first appellant was re-appointed. The reason for their resignation was the change of leadership of the court of appeal. They are clearly conflicted.”

The engagement of these two judges was also opposed by Monaheng Rasekoai of the Phoofolo Associates – a law firm belonging to the Attorney General Haae Phoofolo.

Rasekoai said: “We want to evenly place it on record that we have an objection to the engagement of Mr Justice Kriegler and Mr Justice Van der Westhuizen and we are prepared to lodge a formal application for recusal as and when need arises.”

Mothobi, however, denied that Kriegler and Van der Westhuizen were part of the judges that resigned in protest when Mosito was appointed.

She also indicated how “extremely challenging” it was to constitute a full bench of the appeal court.

“Other than their unavailability during the whole of this month, most of the current serving members of the court are affected by the history of this matter, giving rise to issues of recusals,” she said.

The letters also lay bare Thabane’s desperation to have the appeal court urgently convened to consider and dispose of Mosito’s application.

When Mosito’s re-appointment was frustrated by the four lawyers, Thabane found himself making numerous appointments of judges to act as presidents of the Court of Appeal and removing them when things did not work out.

After Mosito’s appointment was found by the Constitutional Court to have been irregular, due to arguments that his predecessor, Justice Robert Nugent, had been removed illegally as he was not given a hearing.

The Court of Appeal has not been sitting since last year when Justice Nugent was removed.

Thabane had to find a president to head the Court of Appeal, resulting in him advising the King to appoint Mokgoro to act in the position.

Mokgoro’s main mandate was to assign a panel of judges and find convenient dates for Mosito’s hearing but, in an unfortunate turn of events, Mokgoro recused herself. 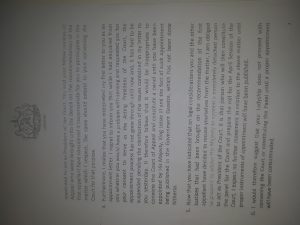 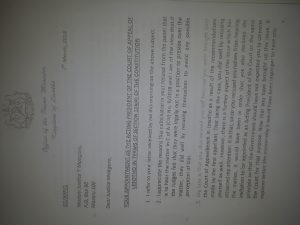 The premier then opted for the High Court judge, Justice ’Maseshophe Hlajoane, advising the King to appoint her with effect from March 19. But still Letsika, Mohau, Teele and Mda challenged the decision by Thabane.

The quartet went to the Constitutional Court seeking an order to block Hlajoane’s appointment on grounds that Mokgoro’s removal was unconstitutional.

In March, Prime Minister Thabane deposed to an affidavit saying the King never issued a gazette appointing Mokgoro as the president of the court of appeal meaning her appointment was never effected.