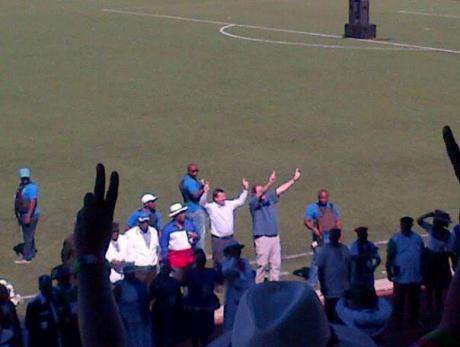 The ‘bad boy’ who bankrolled Brexit says he’s struck it lucky in Africa. But do his claims of a ‘significant find’ stand up? And who’s he been doing business with there?

Arron Banks, the insurance mogul whose millions helped nudge the United Kingdom out of the European Union, appears to have backed another winner—this time in Africa.

In September 2017, the former UK Independence Party backer and close friend of its ex-leader Nigel Farage announced a “significant find” at his diamond prospecting concessions in the tiny kingdom of Lesotho.

“The area around the latest find has already produced some of the world’s most beautiful and clear stones,” Banks told the Economic Voice, a website run by a one-time Ukip candidate. “Judging by our initial exploration I am confident it won’t be too long before we find similar large diamonds.”

Banks says his Lesotho find is “spearheading the revival of the kingdom’s diamond industry”. But an investigation by SourceMaterial and openDemocracy suggests this claim may be considerably overstated.

Our investigation also found blurred lines between Banks’s Lesotho diamond business and his election campaigning. Directors of his mining company are linked to the politicians he is advising, while their party accepted a generous donation from Banks when it was ostensibly paying him for his advice.

Last year, openDemocracy’s reporting on Banks’s finances prompted Labour MP Ben Bradshaw to ask in parliament about “the role of dark money in the EU referendum” and the Electoral Commission is inquiring into the ultimate sourceof the £8.4 million Banks ploughed into his Leave.EU campaign.

His diamond claims come amid suggestions by Banks that he will fund a new Farage-fronted political movement, described as “Ukip 2.0, the Force Awakens”. A return by the pair to frontline British politics, particularly in the wake of recent allegations about other pro-Brexit groups, is likely to renew focus on the sources of Banks’s wealth.

Banks declined to answer our detailed questions about his investments and political ties in Lesotho, calling our reporting a “political attack” without commenting further.

Lesotho is home to some of the world’s richest diamond deposits. In January one of the biggest diamonds in history, a 900 carat monster the size of a couple of golf balls, was unearthed at Letseng, the country’s flagship mine.

Letseng is high in Lesotho’s mountains, home to diamond-bearing rock known as kimberlite. But there is no kimberlite where Banks is digging. Instead, he is exploring Lesotho’s rivers for alluvial diamonds—gems washed downstream from the big mine sites over millions of years of erosion. He is not the first to try this and historical data suggests his chances may be slim.

A document seen by SourceMaterial and openDemocracy shows that between 1960 and 1979, at a site near to where Banks is exploring, just three tiny stones were found after more than 1,000 cubic metres of earth were moved. Their total weight was 0.7 carats, giving them a value of only a few hundred dollars.

Anyone who thinks they can find diamonds there is delusional

It is geologically impossible for Banks to find gems in commercial quantities, says Keith Whitelock, a geologist and expert on Lesotho diamonds who developed the Letseng mine.

Lesotho’s unique geology means alluvial diamonds are only usually found within two or three kilometres of the diamond-bearing rock, according to Whitelock. But Banks is prospecting near Lesotho’s South African border, around 200 kilometres downstream.

“Anyone who thinks they can find diamonds there is delusional,” Whitelock said.

Banks has hired his own geologist, who disputes this view.

“Whitelock is the authority on diamonds in Lesotho so everything he says is pretty much gospel but what can I tell you, we’ve recovered diamonds there,” said Hunter Kennedy, the expert employed by Banks. “In my mind it’s very logical.”

Stones found at Banks’s prospecting sites have been taken to the capital, Maseru, for valuation, Kennedy said. So far, there are not enough diamonds to determine whether the venture can make money and it is not yet clear if the find is a freak occurrence or the start of something bigger.

“He may find the odd one just by chance,” said Whitelock. “But he’s going to have to mine thousands of tonnes to find one diamond and unless you can count your diamonds per tonne or per hundred tonnes you’ve got nothing.”

“I think they should keep digging,” Kennedy said.

There is more to Banks’s Lesotho interests than precious stones. He has emerged as a funder of the Basotho National Party: the BNP is a key ally of the prime minister of Lesotho and part of the ruling coalition.

In 2015, Banks’s election strategy firm Chartwell Political said it was advising the centre-right BNP on its election strategy. Tweets and Facebook posts from the time show Banks “burning the midnight oil” on the campaign trail and posing for selfies with his business partner James Pryor at a stadium rally.

openDemocracy and SourceMaterial’s investigation has found that Banks’s relationship with the BNP went deeper that just attending campaign events. Directors of his local mining company are close business associates of the family of John Thesele Maseribane, the leader of the BNP.

At the same time, Banks was bankrolling the BNP, donating more around £65,000 to its election fund, according to emails leaked to Public Eye, a local news outlet in Lesotho. Banks’ associates had specifically asked for the money to be deposited in an account not linked to the party, Maseribane told Public Eye.

“I was trying to protect the sponsor,” Maseribane was quoted as saying. “If a sponsor requests a very confidential transaction devoid of noises, then that’s the route we’ll take. If the sponsor says please protect me, that’s what we’ll do.” Maseribane did not respond to telephone calls and messages left with his office.

Pryor, who runs Chartwell and helped establish Banks’s African operations, confirmed that Banks was a donor. The emails were leaked “selectively”, probably by “someone with an agenda to discredit either the BNP or John Maseribane”, Pryor said.

In reply to later questions, Pryor said he was no longer working with Banks in Africa. He had helped Banks get set up in Lesotho and their business relationship had come to a “natural end”, though they were still in touch, he said.

Pryor, a key associate of Banks and one of five original “Bad Boys of Brexit” described in Banks’ book about the campaign, has a long history of mixing mining and politics in Africa.

He has been advising political parties there since the late 1980s, first working for South Africa’s last apartheid leader, F.W. de Klerk, and later for the Inkatha Freedom Party. A 2012 photo shows him posing with an AK-47 on the campaign trail in Libya, while other trips have taken him to Zimbabwe, Ghana and Nigeria.

In the UK, he worked on campaigns for Margaret Thatcher and the Referendum party (a precursor to the Brexit movement), as well as running Ukip’s 2010 general election campaign. Later he struck a partnership with Matthew Gunther-Bushell, who represented Bell Pottinger in 2009 as the PR firm attempted to protect the Bahrain government’s image during a crackdown on human rights.

When Banks launched his self-proclaimed “guerrilla war” for Brexit, it was Pryor who connected Leave.EU with Goddard Gunster, the American PR firm that embedded workers at Leave.EU campaign headquarters to help with polling and social media strategy.

The Electoral Commission is investigating potential “impermissible donations” from Goddard Gunster to Banks’s campaign, according to a March 19 letter to the commission from Elizabeth Bilney, Leave.EU’s chief executive.

Nicknamed the Happy Hippy, Pryor also played the unlikely role of grown-up when the Bad Boys’ high jinks got out of hand.

“You can’t fuck this guy off. He’s a real big shot in the United States,” Pryor wrote to Banks when the hungover tycoon almost stood up a Goddard Gunster founder who had flown to meet him in the Bahamas, according to Banks’s book. “I’ve worked my arse off to persuade this guy to see you. For Christ’s sake, sober up!”

And it was Pryor who developed the business model that Banks is now deploying in Lesotho, beginning two decades earlier in Sierra Leone.

Pryor arrived in Sierra Leone’s capital, Freetown, in 2000, just as a decade of civil war was drawing to a close. With him was Nick Karras, a notorious Greek-American gem merchant who had few qualms about blood diamonds because “the blood washes off”.

A brash, hard-drinking extrovert, Karras hired a private jet to fly him and Pryor into the war zone. At home in America he drove Bentleys and Aston Martinsuntil $100,000 in unpaid rental bills landed him in court. Later he lost a $5 million legal action when a business partner sued him for fraud.

Karras and Pryor struck up a relationship with the spokesman of the ruling Sierra Leone People’s Party, Septimus Kaikai: Pryor became the party’s political adviser, while Karras used their high-level contact to advance his diamond deals.

It seems to have paid off. The Sierra Leone government granted Karras its first export licence after the wartime diamond embargo and appointed both him and Pryor to honorary diplomatic posts in the Bahamas, where they later sailed a luxury yacht together.

“I have made many friends and business acquaintances over the last 30 years of working in Africa,” Pryor said. “I have worked on numerous election campaigns and also on numerous business deals. All have been above board, legit and open.” Karras did not respond to emailed questions.

Ostriches of the Cosa Nostra

Based on that success, Karras and Pryor exported the model to South Africa, where they forged similar ties with Inkatha Freedom Party MP Eric Lucas, now a director of two of Banks’s mining companies.

Lucas is a controversial figure. His associates include a businessman who co-owned an ostrich farm linked to the Italian mafia, and documents seen by SourceMaterial suggest he was in line to receive shares in Gold Fields, a mining company at the centre of a corruption scandal, while lobbying on its behalf. No charges were brought.

It wasn’t the first time Lucas had appeared to misuse his position for financial gain. In 2005, he and another Inkatha MP floated Table Mountain Minerals on London’s junior stock exchange, telling shareholders they would identify mining opportunities and then serve as partners in the investments.

With Lucas sitting on parliament’s mining committee, it was a glaring conflict of interest. When his party’s leader found out about his business activities it nearly ended the MP’s career, according to two senior Inkatha insiders who spoke to SourceMaterial.

The deal was shut down—though corporate documents show that Pryor was also set for a payout from Table Mountain. And it did not stop Lucas serving as local partner to his friends: Pryor, Karras and Banks.

“The relationship with Eric Lucas was legal and ethical,” Pryor said. “I’ve known Eric for over 25 years. He was, and still is, a very good family friend.” Lucas declined to answer questions.

Banks’s long relationship with Pryor, who has a history of crossing business with politics, and the secretive donation to the BNP in Lesotho will raise new questions about the crossover between Banks’s business and political interests—though it seems that Lesotho diamonds were not among the sources of his Brexit cash.

Banks has strongly denied that any dark money was involved in the Leave campaign—especially in light of speculation of Russian influence on Brexit.

He told SourceMaterial and openDemocracy he was there on “private business—none of your business”. As Pryor’s business is politics, his answer may not rule out a political purpose to the trip.

Got a tip-off for us about this story? Click here