QACHA’S NEK – Situated across 2,092 km Senqu River and opposite Ha Sekake in Qacha’s Nek, Tebellong Hospital is facing harsh service delivery challenges with women delivering babies by the side of the river, referrals done on rowboats at night and doctors performing caesarean section under kerosene light.

Like other Qacha’s Nek communities, Tebellong also suffers a dearth of water supplies and the hospital stores water in tanks for use during trying times. According to the hospital administrator Ntulele Khiba, government had promised bigger Jojo tanks but has not delivered.

Former Prime Minister Pakalitha Mosisili had also promised during the hospital’s 50th anniversary celebration in 2015 that a bridge would be constructed in the near future. But the Qacha’s Nek outgoing District Administrator Tsebiso Kutumela told the MNN Centre for Investigative Journalism (MNNCIJ) and Informative there are no plans on the pipeline known by his office to address the predicaments.

He noted that government is aware that there is need for a bridge to cross over to the other side of Senqu river, adding the issue of the bridge does not only affect Tebellong Hospital but also the community as it causes unforeseen no-shows at work during floods, which lead to unnecessary job losses.

As DA, Kutumela said he has not communicated Tebellong challenges to the government as he claims he got no powers to address them. He was reluctant to comment further as he revealed he had just been given a notice to vacate the District Administrator’s office by November 31, 2017.

The woes endured by Tebellong Hospital and the surrounding communities are worsened by the absence of bridge that connects them with neighbourhoods across the Senqu River with rowboats being their only mode to cross to the other side of Lesotho and South Africa’s longest river.

Tebellong could find a relief if they are included in 29 footbridges which the government is to construct through financial assistance from the World Bank. Location for these bridges, according to Roads Directorate official, has not yet been finalised.

The official however said Tebellong bridge is in their plans, adding they are currently soliciting funds for its design so that they could know its entire budget.

For heavy stuff and equipment to cross the river, the hospital management has to wait for winter as water levels normally plummet to their lowest point.

There are two hospitals in Qacha’s Nek, Machabeng and Tebellong hospitals. MNNCIJ and Informative team has learned in its recent visit that most patients that access health services at Tebellong Hospital come from afar.

The places, according to the hospital’s Primary Health Care Director Dr Kassongo Nseya Eric, include Qabane in Mohale’s Hoek district, Mphaki and Seforong in Quthing district, and other remote places across the Qacha’s Nek district.

Tebellong acts as a mother body to Sekake Health Centre with cases beyond the centre’s management and capacity sent to Tebellong which also refers its patients to Queen ‘Mamohato Memorial Hospital located in Maseru, 222.6 km from Tebellong.

Blowing own trumpet, Tebellong boasts about “quality services” with zero maternal deaths in the past five years despite the harsh and risky environment they work in with Qacha’s Nek district which is said to record highest maternal mortality in the country.

The hospital’s medical superintendent Dr Michael Luaba Kamangu recalled an incidence where they had to conduct C-Section under a kerosene light after unexpected power cut while they were in the theatre.  “It is risky but the pregnant lady was already on the operating table in the theatre and the electricity cut off, we had to take out the baby,” he said. 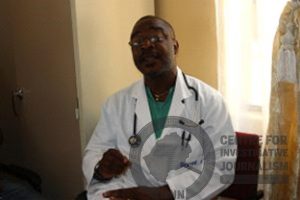 Despite difficulties in crossing to the other side of the river, Khiba said when they have night emergencies beyond their capacity, referrals are bound to be carried. “If the river is overflowing, anything can happen and logs of wood can hit the boat unrecognised as it is dark,” she said, adding from the numerous referrals carried at night, there have never been casualties. 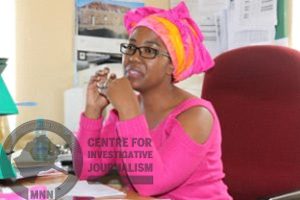 She nonetheless said their major challenge was for heavy equipment to cross to the hospital, indicating the river was full from January to March and they couldn’t send equipment for maintenance and those critical patients for referrals.

“Some of the pregnant ladies had to deliver by the side of the river because they were not able to cross to this side. The other time they had to finally get to our side but all the work was done at the river.”

To buy heavy equipment, Khiba said they have to wait for winter as the river is usually at its lowest levels and bigger vehicles can cross over. She adds some of the equipment gets damaged because of the ragged terrain and bad road infrastructure