You are here
Home > Our Stories > Police pathologist quits over Khetheng

The surgeon is unhappy after he was allegedly implicated in the murder of Police Constable Mokalekale Khetheng.

The MNN Centre for Investigative Journalism (MNNCIJ) established this week that Dr Lefatle Phakoana, who has conducted countless post-mortem examinations for the LMPS since 2014, decided to withdraw his services after he appeared before a police interrogation team twice last month in connection with Khetheng’s murder.

Khetheng was last seen alive at the time he was arrested by his colleagues at a traditional feast in Sebothoane, Leribe on 25 March 2016.

He had been arrested and charged with arson for allegedly torching the house of his superior in Mokhotlong district, where he was deployed.

Khetheng’s body was exhumed at Lepereng cemetery in Maseru on August 11, this year after police obtained a court order in the on-going investigations into his disappearance and suspected murder.

Mokhosi, who is also the deputy leader of the Lesotho Congress for Democracy, fled the country upon his release on bail, alleging he feared for his life.

Dr Phakoana confirmed to MNNCIJ in a recent interview he stopped conducting post-mortems for the LMPS, “after facing harassment”.

He said he was hauled before an interrogation team investigating the Khetheng matter twice, but refused to divulge further details.

The MNNCIJ heard from a close source Dr Phakoana was suspected to have played a role in the Khetheng saga, as a pathologist.

But the acting Police Commissioner Holomo Molibeli, when contacted for comment about Dr Phakoana, denied the pathologist was a suspect in the murder probe.

“No, there is nothing like that. Dr Phakoana is still our pathologist; we still used him even in the most recent cases. It is both not true that he is a suspect and that he shunned duties,” Molibeli said.

Meanwhile, the MNNCIJ saw a copy of an email Dr Phakoana sent to Molibeli on August 23, 2017, and copied to the police Principal Secretary, Khothatšo Tšooana.

The MNNCIJ learned from the email Dr Phakoana was not only unhappy because he was suspected in the Khetheng matter, but he also claims he was not paid for some services he had rendered to the police.

“May I please inform your good office about the marathon battle I have been fighting to get paid for the post-mortem services I offered to the police, and now the lately shocking developments concerning the Mokalekale Khetheng story,” reads the email.

Dr Phakoana continues: “May I put it clear to you sir that I am now afraid and disturbed mentally when my medical ethics are being dragged in the mud by the people I trust (the police).

“Therefore, my inner feeling dictates to me that I will not be doing myself any good to continue with such services until my name has been cleared of any kind of involvement whatsoever by the courts of law in this disturbing Mokalekale Khetheng story.”

Dr Phakoana adds in the email he was even “threatened by being locked behind bars of (sic) something which I know not. I won’t be doing myself any justice to continue working such important legal services yet I am being implicated as being illegal somewhere”.

The other concern, he noted, was that he had battled to get paid for his service for some months between June 2014 and December 2016.

“Since then, some months claims were paid and others were not paid for reasons not known to me.

“My office kept reminding the relevant office about the claims and payments to be made to me after doing the work but to no avail. This kept on continuing whereby I haven’t also been paid since the beginning of this year to date.

“Now, until such time that all these have been well settled, I will not be in a position to continue with such services. I have decided to stop continuing to provide such services temporarily, as I think it is logical not to allow the suspected illegal person, as I am now branded to be such a person, to perform such extremely important legal services.” 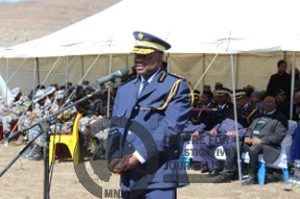 Molibeli said he was not aware of the email while repeated efforts to secure a comment from Tšooana were unsuccessful.

The MNNCIJ further learned Dr Phakoana’s withdrawal left the LMPS with a backlog of pathological services.

Dr Phakoana told the MNNCIJ he already worked on an average 10 corpses on Fridays.

Dr Moorosi corroborated this, adding: “the work is overwhelming… we are understaffed… we need more doctors to help us,” in a separate interview with the MNNCIJ.

Dr Moorosi, however, said he was not aware Dr Phakoana had quit