You are here
Home > News > Opposition gears for radical reforms

Positions that have been caught up in the crisis mainly as tools of the seating premier since 2014 include Lesotho Defence Force (LDF) Commander, Commissioner of Police and National Security Services (NSS) Director General, Attorney General, Chief Justice, Court of Appeal President, Director of Public Prosecutions and Directorate on Corruption and Economic Offences (DCEO) Director General.

As 3 June polling day draws nearer, opposition parties have proposed radical reforms that shall “entrench power sharing” and scrap wide-ranging powers vested in the Prime Minister by the country’s constitution.

Once they assume office, a quartet of opposition parties suggest the reforms shall see the three state organs Executive, Judiciary and Legislature empowered to exercise separation of powers with strengthened “checks and balances”.

The Kingdom’s almost quarter century old second constitution’s founding fathers had bequeathed onto the prime minister these wide-ranging powers without anticipating the country would soon be sucked into a quagmire over these unchecked powers.

In terms of the constitution, a prime minister is a leader of a party or coalition of parties that command a majority in the National Assembly, but the same individual, has far reaching powers to also suspend or if need be, to dissolve the very parliament that gives birth to his premiership.

The opposition parties led by the All Basotho Convention (ABC), Alliance of Democrats (AD), and Basotho National Party (BNP) revealed their radical reforms agenda at a National University of Lesotho (NUL) organised Political Debate held on 18 May ahead of the 3 June polling day. Their forth partner, Reformed Congress of Lesotho (RCL) was however absent.

The debate was also attended by the Lesotho Congress for Democracy (LCD) and the Movement for Economic Change (MEC). Conspicuous was the LCD’s election pact partner Democratic Congress (DC)’ absence – Prime Minister Pakalitha Mosisili led political party – which was only reported by NUL Vice Chancellor Professor Nqosa Mahao to have boycotted the Political debate on account of fear of being ridiculed.

For 14 years Mosisili has enjoyed these far reaching powers and authority until 2012 when he handed power to former Prime Minister Thomas Thabane.

During his administration, Mosisili while Leader of LCD before jumping ship to form DC was characterised by Metsing—then Secretary General of LCD—as dictatorial in a secret conversation with an American ambassador exposed by the WikiLeaks.

Coming in as Mosisili’s successor, Thabane did not last long as the country’s premier as his three-party coalition government cobbled together to replace Mosisili’s reign effectively collapsed over wrangle with his deputy, LCD Leader and current Deputy Prime Minister Mothetjoa Metsing born from their disagreement on the use of this far reaching Prime Minister’s power.

One controversial variance between Thabane and Metsing over the use of these unchecked powers was over the dismissal and appointment of Lieutenant General Tlali Kamoli and Lt Gen Maaparankoe Mahao respectively and many other decisions.

The debate comes ahead of the 3 June polls following the much contested dissolution of the Ninth Parliament by King Letsie III as at March 6 acting on the advice of Prime Minister Mosisili who had just suffered a humbling no-confidence vote in the country’s National Assembly.

Giving a constitutional law expert narrative of the country’s quagmire, the NUL’s Faculty of Law Lecturer Hoolo Nyane let the discussion that revealed the opposition’s radical wish-list ahead of the poll.

Focusing on democracy and rule of law, Dr Nyane said some of the long standing weaknesses of this country are “weak and sometimes lack of institutions of democracy, sometimes called oversight institutions”.

His argument was where they exist; statutory institutions like the Ombudsman, the DCEO and others in country have “serious structural and resources limitations to the extent of rendering them ineffectual”.

According to him, Lesotho is threatened by the decline in the rule of law which he alluded was laid bare by the Southern African Development Community SADC commission of inquiry in to the Killing of Lt Gen Mahao.

He also said the country is faced with dire challenges of a judiciary whose independence is threatened by political interference.

“Political interference in the judiciary as typified by the turnover in the office of the President of the court of appeal. Since 2012 we have seen not less than three occupants in this office, this is unusual by international standards,” said the constitutional law expert.

Posing a question to the parties, Dr Nyane asked: “What is the vision of your political party about strengthening and establishment of oversight institutions like Human Rights Commission, enhancing rule of law and independence of the judiciary within the context we have laid?”

In response, the BNP Deputy Leader Joang Molapo said his party believes the root of the country’s problems lies on relationship at the apex, between the Executive, the judiciary and the legislature.

He argues in recent court rulings, the legislature’s role has been undermined in favour of the executive.

He said the BNP wants to see the country undergo a reforms process that shall be in line with international best practices to ensure correct balance and power relationships between these three arms of state.

Talking to a deep rooted challenge of political interference in judiciary, Molapo argues this is “simply a consequence of the fact that we have allowed the evolution of our political society in the executive to run rampant into any area that it feels it needs to go”. He said lack of effective control on the executive power has thrown the country into the quagmire.

He emphasised there is dire need to institutionalise within individuals in government the need for independence of judiciary and ultimately the independence of the legislature.

“The important lessons for us to learn from these multiple changes in the office of the president of the court of appeal is that when justice Kananelo Mosito (pictured) was officially appointed, the political players in this country, right at the level of the SADC summit were saying that his appointment was unacceptable, without being able to place on record

any shortcomings in his performance. 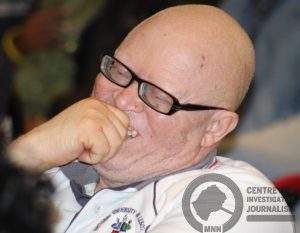 “So clearly there were other issues about him that we did not know about him, but political machinations have ultimately led to his removal from office and the appointment of someone who is seemingly politically compliant,” said Molapo.

However, Mining Minister Lebohang Thotanyane representing the LCD said the DC and his party led seven-party coalition government when ascending to power after the February 2015 polls, “we described ourselves as a reformist government and that program, we have not abandoned”.

However, amid its coalition agreement, since 2015 to date, the DC-LCD led coalition made little progress towards attaining this reforms agenda.

Thotanyane said a recent visit to Maseru by the SADC Facilitator and Deputy President of South Africa Cyril Ramaphosa to ascertain all parties’ commitment that they will continue with the reforms agenda came as an indicator of the regional bloc’s approval of the programme the seven parties’ coalition had laid out.

He said the LCD wishes to see the country reform the role of parliament and strengthen it as an institution of oversight and law making, also emphasising the need for enhancing parliament effectiveness on government oversight.

“When you look at our elections manifesto you’ll see we have highlighted promotion of unity and peace as we believe those are essential ingredients in making sure that this country is stable,” said Thotanyane who is also the LCD and DC elections pact candidate for Teyateyaneng constituency.

Coming to the issue of the president of the court of Appeal, Thotanyane disagreed with Molapo saying his concern is the adherence to due process in the removal of the judges.

“Issues of accountability matter, if I was to be told that there is a president of the Court of Appeal removed from office without following due process I would be unhappy.

“But if the president of the court of appeal was removed through following due process then I am happy. Let it be, and due process should be followed,” said Thotanyane in defence of the removal of Justice Mosito.

Dr Moeketsi Majoro, representing the ABC said the country has just started another fifty years journey but “we started on a quicksand foundation, and for the next fifty years if we started like this we are in serious trouble”.

He said it is troubling that so many of the oversight institution are collapsing or have collapsed and are systematically being taken apart by the ruling elite.

Majoro, revealing his party’s radical reforms agenda said it is shocking that Leader-of-the-House in Parliament if drawn from the executive, a structure he says is flawed and undermining the legislature.

“There are three arms of government, but one powerful person from one arm is actually leading parliament, which ought to be odd, parliament must run its own business.

“The executive must go in there to seek approval from parliament. Not to direct parliament,” said Dr Majoro.

Commenting on the political influence over the judiciary, Majoro reiterated Molapo’s sentiments and added Justice Mosito was pushed-out of the Court of Appeal perpetuate the politicisation of the judiciary.

“You can trump up charges of not filling taxes on time. A euphonious process. You hire highly paid foreigners and you cook up this thing up until the end.

“And you say that was due process? Constitutionalism in Lesotho has now collapsed and now we need to really fix it,” said Majoro.

He suggests a structure that he believes can fix the collapsed constitutionalism in Lesotho, is hinged on “entrenching power sharing that shall see every executive decision subjected to rigorous checks and balances”.

“Never again should the Prime Minister originate the recruitment of an Appeal Court judge and see it all the way through,” said Majoro.

He further opines the ABC holds a view that in the type of “checks and balances” that it aspires to see adopted by the country, “the Prime Minister can originate, but the hiring must be done by parliament”.

Majoro said a few months ago, he held a view that maybe if government changed come 3 June, “we can still work with the judiciary”, but argued that lately some court decisions are really worrisome.

“You have a decision of the court that concludes that perhaps this soldier may have not understood what I had decided. That was a copout that is no less worrisome because there was fear in that Judge,” said Majoro who is also the ABC’s Thetsane constituency candidate.

“We need to take it apart and bring it all together. All judges fired in public and be hired in public through hearings in Parliament.

“The three institutions must be genuinely separated and be independent and we must now legislate and entrench the separation and checks and balances,” he said.

For his part, the Alliance of Democrats Secretary General Mokhele Moletsane corroborated Majoro’s opinion as he added that the executive’s wide-ranging powers should be scrapped in favour of parliament assuming powers to make final appointment of security bosses, oversight institutions leaders and judges.

Moletsane further adds there is need for the judiciary to be more accountable and said the country’s judicial service commission should have clear production standards and a functional case management system.