You are here
Home > News > Calls for Workers to Unite

WORKERS unions and federations joined the world in celebration of May Day amid deep rooted weaknesses of a fragmented working class that has allowed political polarisation to undermine workers bargaining power.

There remains no hope in sight for thousands of workers with this polarisation undermining workers unions to the advantage of both government and the employers.

Among the hardest hit are thousands of women breadwinners, especially those working in the textile and garments factories who usually travel long distances in the winter’s cold morning to spend a whole day on their feet sweating for a few pennies a day in the factories that survive due to the country’s eligibility for access to US markets under the Africa Growth and Opportunity Act (AGOA). AGOA is a US legislation that allows Sub-Saharan African products duty and quota free access to the US Markets.

As workers gathered to sing and dance clad in their regalia at celebrations organised by their various unions, what remains a perpetual challenge for all this fragmented workers unions’ are members numerous grievances that shall never come to pass if workers do not unite.

Today, workers of Lesotho are faced with a struggle for decent work and economic growth but their plight is continuously scarified by their trusted advocates, the unionists, whose fragmentation and power struggles continuously compromise the workers ability to bargain with employers and governments.

The country’s labour code order of 1992 provides for freedom of association and the right to bargain collectively. However, employers frequently violate this rights.

On collective bargaining, the labour code prescribes that at the factory level, collective bargaining is restricted in practice because the law requires that any union entering into negotiations with management must be representing 51 percent of workers at a factory, a condition only a few unions meet today in Lesotho. This is due to the fragmentation, with multiple unions competing for membership among a few workers.

Lesotho’s workers urgently need attention to be refocused to building their unity, not on fragmentations as has been the case lately. This shall go a long way for the country to realise decent work and economic growth by 2030 as envisaged by goal 8 of the Sustainable Development Goals (SDGs).

To realise this goal, workers must unite to achieve; living wages, health and safety in the workplace, equitable conditions of employment, social security and maternity leave among others.

According to Bahlakoana Lebakae, Secretary General of United Textile Employees Union (UNITE) workers in Lesotho continue to earn paltry wages and the struggle for workers to earn a living wage remains but a dream to tens of thousands of workers, especially textile and garments factory workers.

Lebakae said the working conditions in many of the country’s industries are dreadful and remain hazardous to workers, hence a need for health and safety in the workplace to be taken seriously and be enforced.

Commenting on conditions for employment, Lebakae points that workers in Lesotho continue to work under very discriminatory conditions where favourable conditions are put in place for a select few while the majority suffer.

“In most factories will find that there are those employees who are favoured for overtime, while it should be offered to all employees equally. This discriminatory tendencies applies to transportation of workers to and from the work place which is mostly provided for foreign employees while Basotho men and women have to walk long distances daily to get to and from work,” said Lebakae.

On social security issues, Lebakae notes the country has a long way to go as an appropriate bill is only being drafted.

He further said what remains a painful reality is the discrimination suffered by women due to maternity leave laws in the country which he notes need to be repealed urgently.

“Our law used to provide that maternity leave was not compulsory for women, however lately things changed but much needs to be done. Government employees get most favourable maternity leave conditions with a provision of 14 weeks paid leave while textile factory workers are the worst affected with only six weeks paid and 6 weeks unpaid leave,” said Lebakae.

Challenges faced by workers in the workplace mentioned shall remain if workers unions are fragmented. If left unattended, there is no hope in sight for workers in Lesotho.

However, IDUL held its celebration in Peka amid being a member of the LLC, reportedly to chart a way forward following a split with some of its founding members who defected to UNITE.

This fragmentation’s effects were captured well by COLETU delegate, Teboho Tolo who told workers gathered at Pitso Ground conceded the divisions are a reality for workers unions that weaken workers ability to have collective bargaining power against employers.

“As workers, we need to have a collective bargaining power against those who hold the Means of Productions,” he said.

Tolo adds that the country’s political polarisation has some impact on the workers unity and argues this results in the workers agendas being compromised and taken as secondary by some unions.

He points to a recent split among workers unions on whether to support a call to mount pressure on government to address Unites States concerns on AGOA eligibility as a recent case that exposed the deep rooted divisions among the unions.

“On AGOA, people from the same textile sector unions vehemently disagreed on whether to mount pressure on government to address US concerns to guarantee continued eligibility to AGOA due to this unionists putting political parties’ agendas ahead of their union members’ interests,” said Tolo.

He argues that with various governments coming and going, union leaders today, feel too close to government and end up compromising workers interest in favour of government.

Asked what benefits accrue to unionists backing government against workers interests, Tolo cites a possibility of incentives that he said come as “bread crumps from those in government for selling out on the collective bargaining of works”.

He further said the fragmentation of the unions in the country has escalated to a point where bodies like National Advisory Committee on Labour (NACOLA), Wages Advisory Board and Industrial Relations Council lose their strength and government continuously undermines their authority by disregarding these structures in the making of key decisions.

For his part, the President of the Lesotho Council of Non-Governmental Organisations (LCN) Moletsane Jonathan, echoed the call for unity by urging the workers of Lesotho to unite and speak in one voice on workers’ issues. 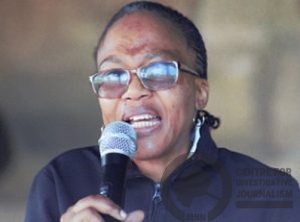 “When fragmented, our voices will not be heard, for we shall be making noise as small groups in isolation,” said Jonathan as he warned the unions.

He further urged the fragmented workers unions leaders to seriously consider leaving by the adages “unity is strength” and “united we stand and divided we fall” if they are indeed advocates for workers’ rights.

Jonathan said fragmentation is also caused by personality cults but emphasised the workers unions’ leaders need to be vigilant and recognise that individuals need organisations to mould them together.

“Workers have to stand up and fight or their rights for them to achieve better working condition and receive wage increases,” said Jonathan.

An assuring voice to the workers gathered at Pitso Ground amid divisions came from the Labour Commissioner Mamohale Matsoso, who cited the LEBAWU recent bargaining for higher pay with the brewing company to be a success story that emerges from workers being united to achieve a right to bargain for higher pay with their employer.

Matsoso also assured the workers that many of their grievance shall be addressed by government as it cannot turn a deaf ear to workers grievances.

She further recommended that workers unions should unite to gain more leverage in their pursuit for living wages while also promising there is much progress made in the formulation of new labour law.