You are here
Home > News > Are workers reduced to a basket of votes?

WHILE factory workers’ plight has for the years not topped agenda of the rulers, every political party seems to bank on their huge numbers come elections time.

Following Prime Minister Pakalitha Mosisili’s loss of a vote of no confidence in ninth Parliament and followed by His Majesty King Letsie III’s declaration of June 3 as Election Day, majority of major parties went to industrial areas to woo voters.

The parties include but not limited to; Democratic Congress (DC), Basotho National Party (BNP), Alliance of Democrats (AD), Lesotho Congress for Democracy (LCD) and All Basotho Convention (ABC).

Most of these parties have been in government but failed to free factory workers from miseries they living in. Their paltry wages, which average M1, 260 ($93.94) per month, are inadequate to cover their basic needs and some are forced to walk several miles to their workplace back and forth every day.

However, a Baseline Report on Worker Perspectives from the factory and beyond on Lesotho, published in 2012 by International Labour Organisation puts a worker’s average monthly expenses at M2,195 ($163.63) which far outweighs the current average factory worker’s earnings of M1, 260 ($93.94).

The ABC had promised to raise their salaries to M2, 020 ($156.60) ahead of May 26, 2012 general elections that saw formation of a tripartite coalition comprised of the ABC, LCD and BNP. However, the coalition collapsed before it could fulfil this promise in 2014.

The formation of the said coalition saw Mosisili moving from the state house to opposition benches in parliament. He then visited factory workers at Industrial Area and admitted to have failed them during his 14 years rule and promised to do things differently if given a second chance.

During the ABC Workers Day celebrations, today in the Thetsane Constituency, the party appeared to have pinned its hopes on workers votes to win the upcoming snap elections with a landslide for it to ascend to power. This dropped from the party leader Motsoahae Thomas Thabane’s address. 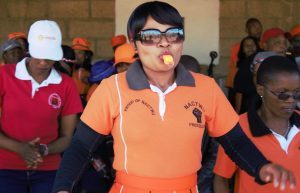 Thetsane is a hub of Lesotho’s 40 000 people factory workforce and home to textile and apparel industries exporting their produce to US through Africa Growth Opportunity Act (AGOA), an American legislation that allows Sub Saharan Africa products duty and quota free access to the US market.

The elections come at a time when Lesotho’s AGOA prospects remain in limbo. The country is still illegible for AGOA but subjected to off-cycle review which may come anytime as Americans want the kingdom to implement all Southern African Development Community (SADC) decisions expected to restore its peace and stability.

The forthcoming elections will see the face of the former executive director of International Monetary Fund (IMF) Moeketsi Majoro —an academic who will be wrestling to keep the Thetsane parliamentary seat under the ABC control.

This is Majoro’s first time to contest elections since he joined the political fray as minister of development planning following death of then ABC Deputy Leader Professor Maboee Moletsane in 2012.

Majoro who aims to garner 8000 votes in Thetsane, assured workers and the ABC supporters who attended the party’s rally to celebrate Workers Day with factory workers as Thabane will be bouncing back to premiership after June 3 polls to cure the country’s ailments.

He took pride in the fact that Thetsane is home to a huge number of factory workers; “you should be grateful that most of the Lesotho’s exports are produced by yourselves”. He however told them things could be better if they also benefitted the same way as their employees (Chinese and Taiwanese) and earned a living wage.

Majoro warned the workers that if they failed to oust the “self-serving government riddled with nepotism and cronyism” come June 3, Lesotho could lose the AGOA beneficiary status.

“AGOA may be leaving, the Americans have decided to hold their horses to see the election outcome so that they make a decision on AGOA,” he said, adding should the congress alliance — led by the DC and LCD — return victors from the polls, factory jobs will get lost with Lesotho having no economic muscles to replace value of benefits coming with AGOA.

From his campaign bag, Majoro promises to put prices of Maseru Private Hospital situated in Thetsane at par with those of Queen ‘Mamohato Memorial Hospital (QMMH) as patients are forced to leave health services in their constituency and travel for services that they do not access at times at QMMH.

He said they have already begun carwash programme and they are yet to erect more carwashes to generate income pool that will assist people in dire need, including payment of school fees for their children.

Majoro vowed to halt import of vegetables from Maseru town into their constituency. “There is no need to be bringing in cabbage from town yet we have arable land along Mohokare River where we can produce our own.”

On Election Day, Majoro promised electorates that there will be vehicles assisting in shuttling them to voting stations. However, this stands out in sharp contrast with prohibited activities as stipulated by the National Assembly Electoral Act 2011.

In section 173(4), the law provides that, “Notwithstanding any other law, a person that provides a public transport service shall ensure that the service operates on the elections day in accordance with the approved timetable and on the approved route”.

If Majoro continues with this plan, the move is likely to become an ingredient for post election disputes especially if he wins the constituency with highly unexpected margin of votes.